creative ancestry: the power of naming the ones who came before us 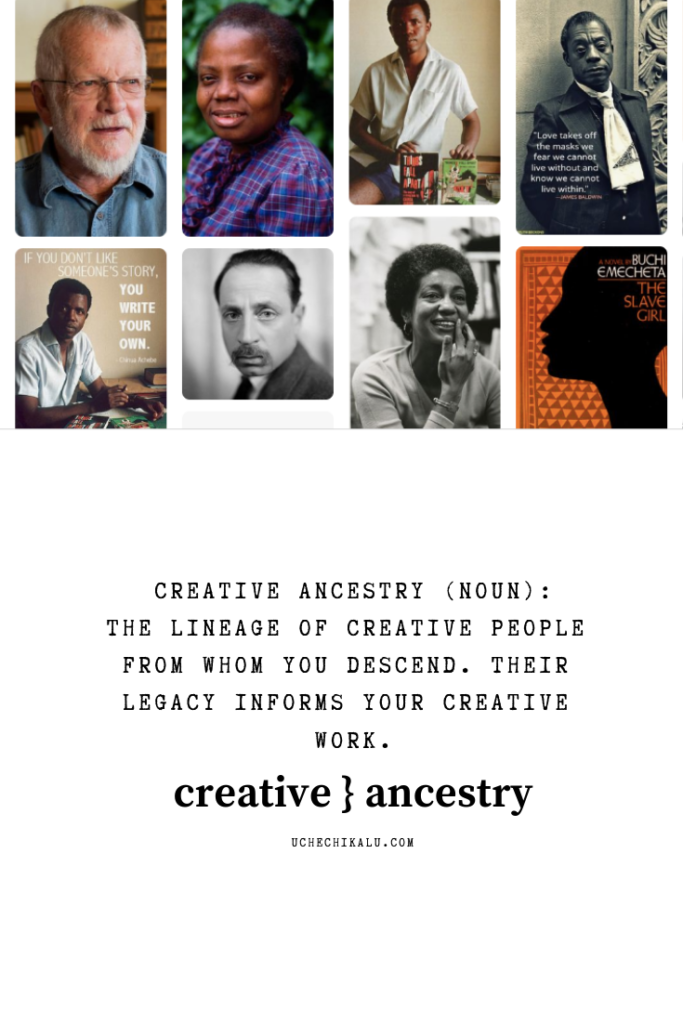 I’ve been crying a lot lately. The grief comes in waves, and sometimes I feel like my whole body is soaking like a wet towel.

I miss my late younger brother. It’s been many years since he died. He taught me so much.

I am also missing the presence of the late Chinua Achebe in the world.  He would have celebrated his 88th last month. He is known as the father of African literature. He is also a fellow Nigerian.

I am mourning the loss of my teachers. Achebe was one of them. Some of them I know by blood, and others became my mentors. I am also in awe of the work they were able to do, at a time when many of them had fewer opportunities than I do.

But more importantly, Achebe is my creative ancestor: Someone in my creative lineage who created worth that allowed me to see where I could go.

They have put me here to do this work.

I set up an altar to honor them. And I put June Jordan there. She is known as the late poet, who published more than 28 books. She is also known as a champion for human rights. But for me, she was my teacher.

She was my mentor. She was the one who believed in my voice and told me that I had something. She allowed me to see my voice as a trail that I should follow. She believed it was worth following.

She is my creative ancestor.

I remember something that I can’t forget. A few months ago, a fellow poet posted something about his mentor, a Mexican poet who had recently died. I saw what he posted, and something inside me recognized the grief that filled my chest.

His mentor was not my teacher, but I was aware that I felt a deep sadness as if I had been in relation to this poet.

I realized that my sadness was connected to my own relationship with my mentor.

I was grieving what she showed me. She allowed me to believe that I could dream of having a voice. Through her, I saw a window into what I could become.

And when our mentors die, something inside us has to start living.  We become the next generation of mentors for others.

But I wasn’t ready yet. I wanted more time. June had been dead for more than 15 years and I still wanted to tell her that I did not know if I was ready.

When our mentors die, they become our creative ancestors. We do not share blood, but we do share the love of language and a shared creative DNA. We become part of their legacy, and the best way to honor this is to leave our own.

I will let myself cry a lot. I must start asking myself if I am ready to become who I can become. I do not know the answer, but I know this:

I have to try.

Your creative ancestors do not care if you are not ready. They want you to try. #creativeancestry #mondaymotivation

As June Jordan says in her song for South African women “we are the ones we have been waiting for.”

Who are your creative ancestors? Name them. Say their names.